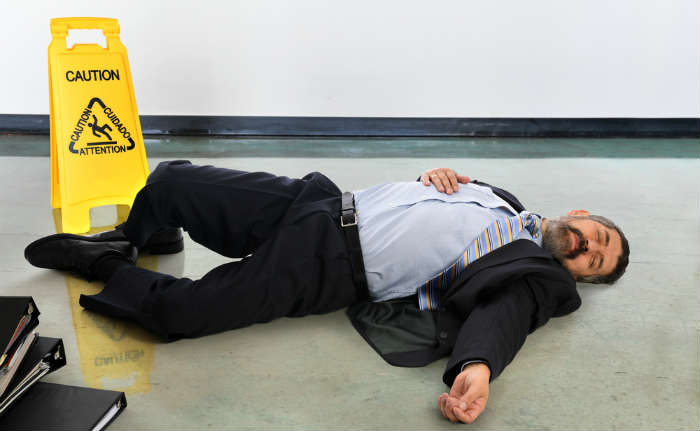 Slip and fall accidents are a little bit trickier than proving car accidents liability. It’s different from car accidents. In a car accident usually two (sometimes three or more) cars hit each other, then someone is at fault and has to pay the non-liable party.

Example: Sally negligently hits John car and John is injured. Now Sally has to pay for John’s injuries and Damages.

Slip and falls on the other hand go something like this; Visitor (Invitee) visits an establishment and visitor accidentally slips and falls on the establishment’s property and is injured. At this point, most people believe that because you slip and fell on someone else’s property, business, etc. you have an automatic claim against them. However, things are little different in a slip and fall. It is important to know all of the facts when it comes to Slip and Fall accidents.

Look at the bottom two examples (or “hypo’s” as they call them in Law School).One is were Sally would be liable for John’s slip and fall and another example were she would not be.

Example#1: John slips on a water puddle in Sally’s Store. John hurts his back and is in pain. He gets rushed to the hospital. We know John is hurt, but is Sally liable for the fall?

Well let’s look at the facts. The water puddle is clear and has been there a long time. Sally employees hasn’t even thought about getting the water up. The floor is also a clear floor making it hard to see the water puddle.

Result: In this example, Sally would be liable for John’s slip and fall. Because in this case, the puddle is not “Open and Obvious”

Let’s look at another example.

Example#2: John slips on a water puddle in Sally’s Store. John hurts his back (and arm) and is in pain. He gets rushed to the hospital. His wife is very mad. We know John is hurt and his wife is mad, but is Sally liable for the fall?

Well let’s look at the facts. In this scenario, the water puddle is still clear but has only been there for one minute. Sally employees had just went to grab the mop but still placed a slip and fall sign right beside the puddle. John even seen the puddle and the cash register told him not to walk over that way because it was slippery..

Result: In this example, the Sally would probably not be liable for John’s slip and fall. However, in this case, the puddle is “Open and Obvious” John may be able to get a small settlement for his troubles if Sally feels sorry for him but I doubt it. It doesn’t matter how mad his wife is or how hurt he is.

Example#3 (Very similar to example#1): John slips on a water puddle in Sally’s Store. John hurts his back and is in pain. He gets rushed to the hospital. We know John is hurt. Sally know John is hurt as well. Is Sally still liable for the fall?

Well let’s look at the real world facts. The water puddle is still clear and has been about 5 minutes. Sally employees was mopping up one puddle but forgot about the one John slipped on. The floor is also still a clear floor making it hard to see the water puddle. There was a slip and fall sign at the front door at another puddle about 7 feet away from where John slipped.

However, this time after John fell, Sally “accidently” lost the surveillance tape that recorded the fall. Sally employees took pictures of the accident but will not release them. By the time John is ready to make a claim, the water puddle is gone, the employee that was working that day has been let go, and the only way to get pictures of the accident is to file a lawsuit because Sally is not letting them go.

Result: This example is like most slip and fall cases where the chance that John will recover is 50/50.  In this case, it is hard to tell if the puddle of water John fell in was “Open and Obvious” without all of the facts. Sally knows what happen but “lost” the tape and won’t release the pictures.

Here you can see how in the real world you will most likely need a lawyer to handle your slip and fall claim because of the complexity of the facts, and the tricks establishments use to avoid being found liable and paying out a settlement.

I hope you have learn something from this post, see you next week!

At Hopson Law Group we represent clients who are having a tough time getting compensation for their slip and fall accident. We can help you get your maximum settlement. You can reach us at 662-624-4100 to set up an appointment for a free consultation to get help with your slip and fall claim!